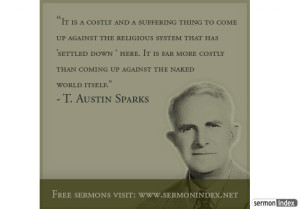 “The whole history of the church is one long story of this tendency to settle down on this earth and to become conformed to this world, to find acceptance and popularity here and to eliminate the element of conflict and of pilgrimage. That is the trend and the tendency of everything. Therefore, outwardly, as well as inwardly, pioneering is a costly thing.” T. Austin Sparks

T Austin-Sparks worked with Jessie Penn-Lewis and her publication and speaking ministry, The Overcomer Testimony. In 1926, he established a conference and training center at Honor Oak in southeast London and Kilcreggan House in Scotland. From the Christian Fellowship Centre, Austin-Sparks and his co-workers ran a publishing operation that printed a bi-monthly magazine, A Witness and a Testimony. This magazine was printed from 1923 until Austin-Sparks’ death in 1971. Austin-Sparks also published books he had written or edited from transcripts of his recorded messages. Among the many books written by Austin-Sparks, the most well-known include The School of Christ, The Centrality and Supremacy of the Lord Jesus Christ and We Beheld His Glory. Austin-Sparks’ speaking ministry took him around Europe, North America and Asia holding conferences in the United Kingdom, the United States, Switzerland, Taiwan, the Philippines, and elsewhere

His work at the Christian Fellowship Centre was international in scope. Many trained under his ministry became missionaries and Christian teachers. This enabled him to work closely with several well-known Christian leaders in the UK and other countries, including Bakht Singh of India, Watchman Nee of China, Roger Forster of Forest Hill, Stephen Kaung of Richmond, Virginia and Lance Lambert of Israel.

One of the great marks of a disciple is that he is little a part of the world. The disciples had become united in the cross and Resurrection with Jesus; they belonged to another world, the kingdom of heaven.

It is no wonder that Jesus took pains to make clear to His disciples the impassable gulf between Him and the world and also between them and the world (John 16:16-21). He went as far to say that the world not even be able to recognize the Spirit of God when it came. “the world at large cannot receive him, because it isn’t looking for him and doesn’t recognize him” (John 14:17).

Why is there such a “power outage” and faith is practiced so little today? We are too worldly. The world rules in the lives of Christians. The world offers the lust for physical pleasures, the lust for everything we see, and the pride in our possessions—all of these things rob the heart of its desire for that true self-denial that is necessary for receiving the Holy Spirit and power.

Provoking Thoughts on Our Life in Christ

Provoking Thoughts On Our Life in Christ

We approach our spiritual life in a rational way. We believe that if a man exercises self-control and is disciplined, and can educate himself spiritually, he can produce a life that will eventually become Christlike. But we forget to take into account one thing, sin. Sin has taken all rationality out of life and made it totally wild!

Sin is not a defect in character. Sin is all out mutiny against everything God stands for. One of two things has to die in us. Either the life of God or sin. The Christian life is not a twelve step self-help program for cleaning up the flesh. God has only one outlook on the sin in our lives. It must die.

If sin rules my life, God’s life in me will wither up and die. If God, through Christ, rules my life, sin will die. And yes, screaming, snotting, whining all the way.

Sin’s final climax was the death of Christ. What was true in history will be true in you and me unless we allow Jesus Christ to rule in our lives. We must deal ruthlessly with sin in our lives.