My Favorite Books on Prayer: Prayer That Availeth Much by T. M. Anderson 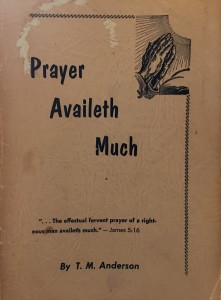 I was teaching in the department of religious studies in Asbury College when I entered into the covenant of prayer with Christ. It had been my purpose for several months to prepare some written messages on the Epistle of Hebrews. In order to have time to devote to this work it was necessary for me to arise early in the morning and do the writing before the hour I was scheduled to meet my classes. I began this work during the first week of 1950.
I was suddenly awakened about midnight on January sixth. Knowing that I had a full day of work before me, I felt it necessary to sleep a few hours lest I be too weary in mind and body to do the writing and teaching. At that moment the Savior spoke to me. He asked me if I were willing to sacrifice some sleep in order to give Him an opportunity to speak with me in the quiet hours of the morning. He told me that it was necessary to deny myself of sleep in order to prevail in prayer. I realized for the first time that denying myself of sleep was a form of fasting. For five hours I waited before the Lord in sacred worship and holy communion. My soul was greatly revived, and I felt refreshed in mind and rested in body.
After this remarkable manifestation of the savior I was constrained to examine my prayer life. I was impressed to consider the time spent in prayer during the average day. I was humbled before the Lord when I discovered how little time had been given to Him in prayer and meditation. It had been my daily practice from the day I was saved to spend some time in prayer morning and evening. I had established the family altar in my home. I had spent time in secret prayer during the years of my ministry. I had never knowingly overlooked the importance of prayer. I am now aware that I had never discovered the possibilities in prayer like they were revealed to me when I waited five delightful hours before the Savior that memorable morning.